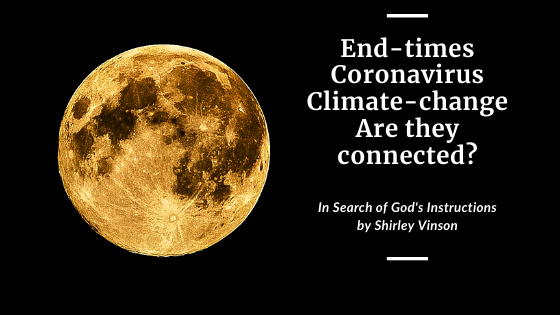 Yes, end-times, coronavirus, climate change are connected by the prophecies in the Books of Daniel and Revelation. The list below identifies five groups of people on earth who connect to the End-Times. Each of these groups has a significant role in connecting the dot to the End-Times.

The Iron Kingdom – The Roman Government

The Potter’s Clay represents those who worship GOD, the creator of all mankind on earth.  These people have also accepted Yeshua (aka Jesus) as their Messiah and the Lamb of GOD.

The Beast from the Sea

The Beast is one individual who have both, political and religious power over all people on the earth. The Sea represents many people residing in different nations on earth, and they speak diverse languages. The leaders of the nations are in allegiance with the Beast of the Sea. In this way they are strengthening the Beast’s authority over all people on earth.

During Rome’s rule, the Emperor Constantine, was the first-person that held both Political and Religious power on earth. After his death, these powers were passed on to the Popes. As a result, the Pope is the only authority figure on the earth that holds both Political and Religious power.  This power authorizes him to make and change religious and political laws on earth. Nevertheless, they are powers granted by man on earth and not by GOD.

The Beast of the Earth

The Beast of the Earth signifies the Anti-Christ. There are many people on earth who have not accepted Yeshua as the Messiah and the Lamb of God. However, this Anti-Christ is a group of people that will support the Beast of the Sea. This group have the power to cause leaders of nations to implement laws according to the standards they dictate.

Consequently, I am aware of only one group of people who has implemented laws to assist the Beast of the Sea. They are the Ultra-Orthodox/Zionist group of Jews pushing Noahide Laws on the nations. These Talmudic Laws forbids praying to Yeshua, aka Jesus, or acknowledging Him as the Son of GOD.

I’ve listed eight events below. Each have a connection to the fulfillment of Daniel’s prophecies and the Book of Revelation. These events are devised by man; yet, GOD has allowed them to happen in order to achieve HIS will.

The contrast of ideas and purpose between these two parties created instant polarization. Not just in ideas and purpose, but also in judgements and determination. For example, each candidate took advantage of the other’s personal weakness as indicative of their inability to lead the free world.

It has been almost four years since Donald Trump became elected as the President of the U.S. Yet, the nation is just as divided, contentious, and untrusting of each other today as they were before the election. Biblical prophecy shows this polarization will not only continue, but escalate in the future.

In June 2016, prior to Donald Trump’s election as the President of the U.S., the citizens of the United Kingdom voted to leave the European Union (EU). Needless to say, shockwaves rippled across the globe as a result of the vote.

Immediately, those who voted against leaving dug in their heels, and determined a second referendum had to happen quickly to overturn the vote. With much controversy, arguments, brawls, and lawsuits, three years later Parliament finally moved forward and fulfilled their promise to the “Leave” voters.

Not all Climatologists agree the climate is as dire as the Pope and many world leaders seem to think it is. The world is indeed experiencing some climate changes. However, the climate changes are due to the actions of people on the earth through financial greed and no appreciation for the earth being the common home of humanity.  GOD designed a balance within the eco system to heal itself of sickness, through the natural processes HE designed into the earth when HE created it.

Economic globalization is a huge contributor to the problems the world is experiencing with climate change.  Still, those who acknowledge that GOD has given humanity the solution to improving our climate will always be at odds with those who think otherwise.  Consequently, the actions taken by these two groups of people to solve our climate problems will reflect their divisions and mistrust of working together to solve the problem.

The Pope is requesting that all national leaders of the world meet in Italy to discuss an agreement to institute Sunday as a weekly day of rest. According to Biblical Prophecy, Sunday rest is a mark of the Beast’s religious system to change the instructions of GOD regarding Sabbath rest. This event was prophesied by Daniel.  In other words, a world law that imposes Sunday as a day of rest is in essence asking humanity to show their allegiance to the Sun god, as oppose to the GOD who created both the sun and the Sabbath.

The people who proclaim to be a child of GOD, our creator, will surely be persecuted for choosing to rest on the seventh day Sabbath instead of choosing the first day to rest.This persecution is revealed through the writings of John the Apostle in the Book of Revelation.

The Noahide laws are the works of the Anti-Christ Beast system, who will give their power to the Beast of the Sea for a period of time. GOD commands that HIS people remember and keep the seventh day Sabbath, which is Saturday, as their rest day.  Contrary to this, The Beast of the Sea is implementing laws under the guise of “Re-Education Day,” in the USA; that only people who are born Jewish are allowed to observe the seventh day, Saturday, as their rest day.

The Messiah, His Apostles, and the early Christians (aka the Way) kept the seventh day of the week, Sabbath, as their rest day because it is commanded by GOD to all who worship HIM as their GOD.  The Book of Revelation reveals tells us, those who keep the commandments of GOD AND have the testimony of Yeshua, the Messiah; will be persecuted by the Beasts and the Dragon.

The book of Jubilees tells us that GOD created borders for nations of people.  As the Israelites traveled from Egypt to the promised land, they walked through territories that did not belong to them.  Many times, GOD told them that HE would not remove certain nations from their land for specific reasons.

One of the commandments that GOD gave the children of Israel, were they were not to remove the stakes of the border property of their neighbors. Borders are a design of GOD to allow people who are like-minded to live in harmony with each other. They share the same values and feel threaten when those values are thwarted by outsiders. Illegal Immigration exploits those feelings of threat.

People are dying from lung illnesses caused by Coronavirus. Medical reports show the virus has mutated several times since spreading over the world, and scientists are quickly trying to develop a vaccine for the virus. The WHO statistics show thousands of people worldwide have died as a result of Covid-19.

Nevertheless, the Coronavirus is not a plague from GOD. When I compare the biblical plagues sent by GOD, versus the Coronavirus, there is a vast difference between them. GOD’s plagues are swift, and they kill tens of thousands of people within a manner of moments.  GOD’s plagues do not target random people such as the elderly, obese, or those with chronic underlying healthcare illnesses.

Most importantly, GOD will use HIS prophets to warn people to repent before HE sends HIS plagues on humanity.  The reason for this is because GOD does not take delight in destroying the soul of any human-being. GOD will release seven plagues on the earth in the last days, but those plagues have not been released yet. God has given the human-race thousands of years to prepare for the release of them. Let us repent now while we still have time.

The Agenda of the One World Order

The Agenda of the One World Order is many. Firstly, the agenda is to unite all the nations as one world. Meaning all laws of order regarding politics, worship, healthcare, and economics will be decided and implemented by one group of people; who are united in one idea, and one goal.

Secondly, depopulate the world population and maintain it at the level they deem acceptable.

Thirdly, ensure all people who are not a part of the decision-making governance will take order and carry them out as instructed. They will not ask questions, think for themselves or create insurrection among the common people. In other words, they will be citizen-soldiers carrying out their tasks, regardless of how unjust or ridicules those tasks may seem to be.

Lastly, faith and worship of a heavenly supreme GOD will not be permitted under any circumstances.

The Iron Kingdom and the Potter’s Clay are mixed together in all the nations on earth. They don’t share the same values and they worship different gods.  The Potter’s clay wants to worship GOD the creator of the entire human-race. However, the Iron Kingdom think of themselves as gods. Therefore, to them they have supreme authority to rule over the common people on earth.

Shortly before the Kingdom of Righteous is set, the Dragon via the Iron Kingdom will persecute the Potter’s Clay.  This persecution began around 120 C.E., shortly after the Messiah was staked to a tree.  After the Messiah’s death, Vespasian and Titus destroyed Jerusalem and Judah was again driven into captivity.

Since 120 C.E. GOD has been refining the tribes of Israel through tests of Spiritual fire. HIS refining process is similar to what a refiner uses to refine pure gold. This is an extreme tribulation period for the Potter’s Clay. The tribes of Israel are scattered over all the earth, and many of them cling to the words of GOD. They are eagerly waiting for GOD to fulfill HIS promises to them and bring them out of captivity. They know they will not survive GOD’s refining process if they deny Yeshua, their Messiah, if they disobey GOD’s commandments.

How Do I Prepare For The Kingdom of Righteousness?

As a result of this, I encourage you, to stay in the word of GOD. Study your bibles so that you can discern the truth about GOD and get to know HIS character. Pray, pray, and pray some more. More than ever before, now is the time to keep your eyes focused on GOD. Become diligent and determined to live out GOD’s instructions in your life.

Most importantly, guard your soul, and teach those you love to guard their souls too. Seek GOD with all your heart, mind and soul. By doing these things your character will change. Others will see the change in you, and you will become a guide and support to others. Your change will strengthen you through GOD’s refining process. It is GOD’s desire that you survive HIS refining process, and be counted as worthy to enter into HIS Kingdom.

Below are some links to videos. They should assist you with deciding for yourself what is true and not true regarding the events I’ve listed in this episode. Until our next Podcast may God be with you and strengthen you. And may the WORD be a lamp to your feet on the path of darkness, in these dark days.