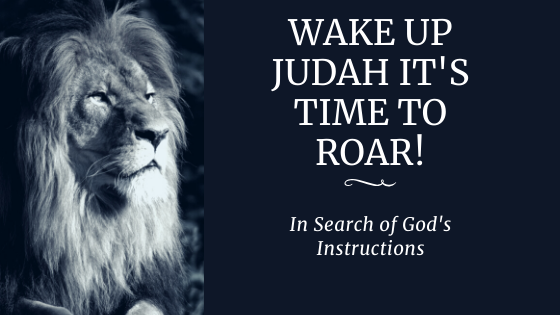 The Prophecies of Revelation and Daniel are ending

Wake up Judah! Psalm 83 specifically tells us that God is aware of a plot that the Gentile nations conspired to steal the heritage of His people, Judah and Israel. This conspiracy began after God drove Judah and Benjamin into captivity in 70 AD. Their reasons for doing this was to take possession of the land of GOD, and to wipe out the true identity of the people of GOD, aka the true Hebrews. .

God allowed 2300 years to the Gentiles to rule the earth. Currently, they are fulfilling their time period, by trampling on Jerusalem. As a result of this, the prophecy of Daniel 8:13-14 and Revelation 11:1-2 are being fulfilled. This is revealed in the Book of Revelation 3:7-10.

Theft of Judah’s Identity and Heritage

The persecution that is now happening to the people of God is fulfilling Revelation and Daniel. Yet, despite how bad things are in the world, God is in control of the timeline of all things, and HE will bring all things to an end according to HIS Timeline.

Rest on the 7th day Sabbath must end; due to the fact that the One World Religious System requires the first day of the week to be holy. As a result,  Pope’s agenda is to make Sunday, the 1st day of the week, the official day of rest and worship. Likewise, the Zionist/Orthodox Jewish Sect in Israel is to enforce Noahide laws, via the teachings of Talmud, on the entire non-Jews population in the world.

The Books of Ezra and Nehemiah – the Levitical Priesthood is corrupt

The Book of Ezra shows that Babylonian priests said their genealogy was a part of the Levite tribe, however they had no documents to prove it. Nehemiah saw the priests doing sacrifices and prayers to idols;

Nehemiah asked them to prove that they were indeed from the tribe of Levi, but they could not. In this way, Nehemiah discovered they had corrupted the Levitical Priesthood.

Therefore, the Lord said: Insomuch as this people approach Me with their mouths, and honor Me with their lips, but have kept their hearts far from Me, and their worship of Me has been the commandments of men, taught by rote (repetition from memory often without attention to meaning).

The Pharisees could not read the Hebrew Torah scroll.  This is why they wrote the Talmud and claimed it to be the oral law given to them by God. In the end, they have elevated the teachings of Talmud above Torah, aka the instructions of GOD.

Talmud and Noahide laws are NOT laws from God

There is a book titled The Non-Torah, Exposing the Mythology of Divine Oral Torah, published by The International Alliance of Messianic Congregations and Synagogues (IAMCS). I strongly recommend my listeners purchase and read this book. It provides an in-depth explanation of why the claim that God gave an Oral Torah to anybody is a false claim.

Satan is targeting Judah, Israel, and Gentiles who have faith in Yeshua.

When the Messiah, aka Yeshua, was nailed to a tree, GOD ended the animal sacrifice system. This is why man no longer slaughter animals to ask GOD to forgive them of their sins.

However, Yeshua did provide a way for mankind to directly ask God to forgive us of our sins by directly asking GOD via prayer in Yeshua’s name.  For this reason, we end our prayers with the words, “in the name of Yeshua, we pray.”  In this way, GOD hears our prayer and answers those who are faithful to HIM.

God put HIS seal of identity in the 7th day Sabbath. He said the 7th day Sabbath is a sign between us and HIM.  Most importantly, it is an instant statement to the world who GOD’s people are. Satan knows, this group of people will not easily submit to Sunday worship. Neither will they deny Yeshua as the Lamb of GOD.

How can we be sure these Ashkenazi Jews are not the people of God?

Furthermore, the book of Ezekiel; 40-48. God shows GOD and the Messiah will be the new temple.  The Levites will not minister before GOD because they broke their covenant with Him, and led Judah and Israel into captivity

GOD revealed to me that I am of the tribe of Judah.  My descendants were African Slaves brought to the U.S.A. on Slave Ships. As a result of GOD’s revelation of my ancestor’s identity, I began seeking answers about the people GOD speaks to in the Bible. When I stated seeking answers, GOD started revealing truths.

A majority of descendants of African-American Salves are from the tribe of Judah, and many other are from the tribes of Benjamin and Levi.  As a result of this, I assure you, I am not anti-semite, nor do I carry a grudge against the people known as the Ashkenazi Jews in the land of Israel today.

To the scattered tribes of Judah, Israel, whom GOD sent into captivity via the Atlantic Slave Trade, and to Gentiles who love the Messiah; I ask that you stay in constant prayer.  Study the word of GOD as written in the Bible, and historical documents. Seek truth, do good and trust in GOD.

GOD will soon bring us out of captivity.  Do not allow bitterness of the past consume you. Focus on GOD and stay close to HIM and our Messiah. We are living in the final days before the Messiah returns to rule the earth for 1000 years.  Therefore, stay focused on preparing you heart and soul to meet HIM. In the meanwhile, may GOD keep you in the wings of HIS love and protection, and shelter you with HIS peace through the dark days we are now facing.

**Disclaimer: Links Provided May Contain Affiliates, Please Note That I Only Ever Recommend Products That I Myself Have Used and Support**

I used the following resources for this Podcast Episode:

Non-Jews NOT allowed to keep the 7th Day Sabbath