The Book of Revelation Means – Part 2 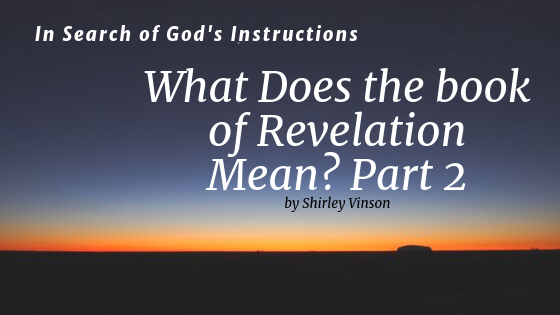 In Revelation, the Messiah tells John those who do the commandments of God will have a right to the tree of life. The Book of Revelation means they will be allowed to enter through the gates into the Holy City.

Revelation is warning us who living on the earth today to prepare for a greater tribulation than the Spanish Inquisition and Religion Crusades.

As a result of this, I decided to look at the fourth commandment of God; to remember the sabbath day. My search took me through the following paths:

God said to Moses: Speak to the Israelite people and say: Nevertheless, you must keep my Sabbaths, for this is a sign between Me and you throughout the ages, that you may know that I the Lord have consecrated you. You shall keep the Sabbath for it is holy for you, etc.

Most importantly, is that God has placed His identifying mark on the seventh day, for all people who profess to worship Him.  Therefore, God’s people have received His seal of identification if you are doing what is required by Him in regarding to the seventh day sabbath.

Of greater importance, is that God said it is a sign between Him and His people for as long as they live. In retrospect, my personal experience has proven to me that this statement is absolutely true.  When I started doing God’s appointed sabbath, I was often asked, “are you Jewish?”

The Book of Revelation and Daniel

In this book Daniel, chapter 2: 31-41 explains to King Nebuchadnezzar that over time his kingdom was going to be ruled by a fourth kingdom who would be known for their iron characteristics. After Daniel described the image of the stature to the king, he tells him that towards the end of the ages the iron kingdom would be partly strong and partly weak. In the end, God is going to destroy the iron kingdom and set up a new kingdom on the earth that will never be destroyed.

Following this further, in Daniel 7; Daniel falls asleep on his bed and starts to dream. Upon waking up, he immediately writes down the vision of his dream. In the dream 4 beasts are violently fighting each other. The fourth beast is extremely strong, has iron teeth,10 horns, tramples the other beasts and is different from the other beasts.

Although Daniel 2, and 7 appear to be two different visions, the meaning of the visions is in fact the same. Firstly, iron is represented as the leg and feet in the stature, as well as the teeth of the fourth beast. Secondly, four kingdoms represent the stature and the beasts. Thirdly, God is going to destroy the fourth kingdom and set up a kingdom that will never be destroyed.

In light of the vision, Daniel asks for clarity. The man of God tells him that the 10 horns is 10 kings from the kingdom, and one of the kings is going to be different from all the previous kings. Furthermore, the king that is different is going to conquer 3 of the other kings.

Likewise, this king is going to speak arrogant words against God, and he is going to persecute the saints of God; as well as act on his heart’s intent to change times and laws. And the saints will be given into his hands for a time and times and half a time.

Revelation and Roman History on the Emperors

All things considered, during Constantine’s rule as Augusts of Rome, he was different in that he claimed that he converted from paganism to Christianity. Consequently, he placed himself at the head of the Christian church. Therefore, he was both the political leader of Rome and the religious leader of Rome.

Constantine created the Council of Nicaea, which lead to the Nicaean Creed followed by all Christian churches today. But the greatest significance is that Constantine decreed Sunday, to be the venerable day of the sun, and a day of rest for all city activities.

In the final analysis, Constantine was indeed a different kind of Emperor because he placed himself at the head of all Christian Churches.  In the same manner, he elevated the status of Bishops.  Additionally, he abolished pagan punishments for celibacy, crucifixion as a form of capital punishment, and he made it more difficult for men to divorce their wives.

The Book of Revelation

Chapter 13: 16 – 17 says, the dragon is going to give his power to the beast for 42 months. During this time the beast is going to use this power to cause the rich, poor, free, and slaves of the world to receive his mark on their foreheads or the hand. The purpose of the mark is to keep them from buying or selling anything unless they have the mark.

Revelation 12 and 14 tells us that Satan went after the people who keep the commandments of God, and have the testimony of Yeshua the Messiah

Current events with the Vatican and Sanhedrin

In 1999, the Catholic church and the President of the Lutheran organization signed an agreement to reunite all Lutheran denominations under one umbrella, that umbrella being the Catholic umbrella. Since the signing of the Agreement between the Vatican and Lutheran Church, there has been an aggressive agenda of the Catholic church to unite the world under one form of religion and under Sunday as the day of rest.

In1999, Israel went to the U.N. Diplomats, Delegates, and Emissaries and convinced them to sign a document to unite the United Nations with 7 into Noahide Laws. The Vatican signed the Noahide Law Agreement with Israel in 2019.

During his term in office as President of the U.S. Jimmy Carter signed an agreement with the Israeli Sanhedrin, to implement the 7 Noahide laws in the U.S. Since this time every President in office, as well as State Governors has signed this agreement.

Additionally, there are many more nations I haven’t named who has signed off on this agreement, and are enforcing the Noahide Laws all over the world.

**Disclaimer: Links Provided May Contain Amazon Affiliates.  As an Amazon Affiliate I earn from qualifying purchases. Please Note That I Only Ever Recommend Products That I Myself Have Used and Support**